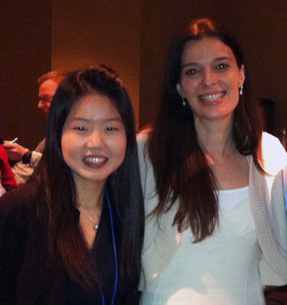 Congratulations to first year dental student, Kyulim Lee, who was chosen as one of nine national finalists to compete for the American Association of Dental for Dental Research (A.A.D.R.) Johnson & Johnson Healthcare Products Hatton Awards in the junior category.

The award is aimed at promoting clinically relevant-translational research projects like Kyulim’s study, “Porphyromonas Evades Ubiquitination-NDP52/p62 Machinery and Induces Autophagosome-like Vacuoles for Survival in the Oral Mucosa.” She conducts the research in the Özlem Yilmaz laboratory and Yilmaz serves as her mentor and the clinician-researcher on the project.

The award competition will take place during the annual A.A.D.R. meeting in March 2014 in Charlotte, N.C.

“I am so proud to have Kyulim represent the University of Florida. I believe she serves as a great role model for other dental students and undergraduate students who aspire to become clinician-scientist,” said Özlem Yilmaz, D.D.S., Ph.D., an associate professor in periodontology and oral biology.

Kyulim worked as an undergraduate research volunteer the Yilmaz laboratory between 2011-2013 before she was accepted to the DMD program in Summer 2013. She was recently accepted to the integrated DMD/PhD program. She currently has two first-authorship papers in submission and one second-authorship was recently accepted by Molecular Oral Microbiology journal. She authored and co-authored several abstracts in the Yilmaz lab previously and made an oral presentation in the IADR meeting in Seattle, Wash., in March 2013 which also received IADR travel award.  She represented the college in the Hinman Dental Student Research Symposium in October 2013.