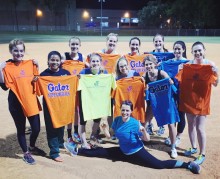 Congratulations to the UFCD women’s softball team, the Drill N Fills, for winning the UF intramural softball championship for the second year in a row. The team, made up of dental students from all four class years and two speech pathology students, have competed in the UF intramural softball league this semester, apparently drilling the balls and filling the bases with runners. On April 19, they took home the league championship with a final score of 5-2.