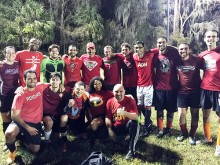 On a beautiful January evening, the DMD class of 2016 gave it their all, came back from behind and defeated the class of 2018 3-1 during a high-stakes soccer matchup at UF’s Hume Field.

Dr. Marc Ottenga serves as the faculty adviser for the class of 2016 and their commitment to winning was a relief for him since he and Dr. Alex Delgado, faculty adviser for the class of 2018, had a friendly wager on the outcome of the game. The faculty adviser for the winning team got to pick the “punishment” for the losing team’s adviser. Had his team not been victorious, Ottenga would have had to shave his thick head of hair. Instead, Delgado will have to dress up as “Schmearman,” a character Ottenga devised as a teaching aid for dental students (see below to learn more about Schmearman) to help perfect their technique in applying dental restorative materials. 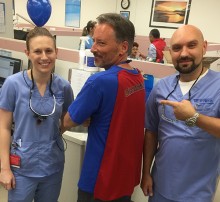 Schmearman is the dental super hero that represents the Soon To Be World Famous Dr. Ottenga Schmear Technique. The Schmear technique was born approximately eight years ago in a deli far, far away. While spreading (schmearing) cream cheese on my toasted bagel, I realized that as it schmeared across the bagel toward the toasted edge, it cut off cleanly and adapted perfectly to the toasted edge. Of course if the toasted edge represents the cavosurface margin of a dental preparation, then the cream cheese represents the RMGI or composite resin. Therefore, we have the perfect technique to apply and adapt dental restorative materials. And thus the Schmear technique was born. 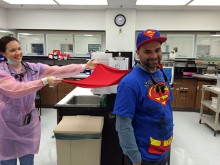 On February 18, Dr. Alex Delgado, always true to his word, arrived at the dental school in full Schmearman regalia. In a gesture of unquestionable loyalty and dedication, members of the class of 2018 also dressed up as Schmearman to show their support for their class adviser. Although we can not be certain that any dental lessons were learned during the Schmearman Wars of 2016, we are certain that there is a lesson here, somewhere.

And then one enterprising DMD student created a lovely meme.