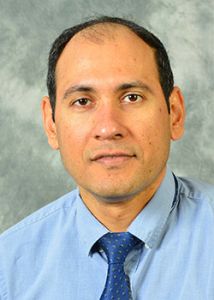 On February 7, Nadeem Kahn, Ph.D., M.B.A., joined the UF Department of Oral Biology as an associate professor. His primary focus is research and he will also be involved in teaching at the college.

Khan moved to Gainesville from Grand Forks, North Dakota, where he was in the Department of Biomedical Sciences at the University of North Dakota. Khan earned his bachelor’s in biology in 1999 and his master’s in microbiology in 2001, both from the Dr. B.R. Ambedkar University, in Agra, India. He went on to earn his doctorate in microbiology from Bharathiar University, Coimbatore, India, in 2007 before moving to Liverpool, United Kingdom, where he completed a master’s in business administration at Liverpool John Moore University.

From 2014 to 2017, Khan served as a research scientist at the Center for Infectious Disease and Immunology at the Rochester General Hospital Research Institute in Rochester, New York, before moving to the University of North Dakota in 2017 as an assistant professor.

His research interests include:

In addition to his teaching experience, Khan has a number of citations in peer-reviewed publications and two book chapters, has been invited to give scientific presentations at meetings throughout the United States, has participated in five funded studies and has funding pending for two studies: An R21 project investigating “Host reparative response to influenza;” and an R01 project, “Lung inflammation and barrier crosstalk in acute lung injury of influenza.”