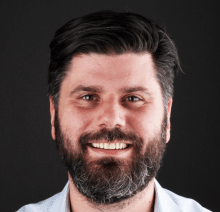 On August 16, Georgios Kouveliotis, D.D.S., C.D.T., Ms.C., joined the college as a clinical assistant professor in the Department of Restorative Dental Sciences Division of General Dentistry. A prosthodontist, Kouveliotis is teaching prosthodontics as well as general and operative dentistry to students in didactic, preclinical and clinical settings. He is also providing patient care in the UF Health Dentistry Faculty Practice in Gainesville.

Born in Athens, Greece, Kouveliotis began his dental education in 2000 as a dental technician. After working for two years as dental technician, he attended the Dental School of National and Kapodistrian University of Athens, or NKUA, graduating in 2011 with his dental degree. In 2015 he completed an advanced education program in prosthodontics at NKUA and then joined NKUA as a scientific associate in the Department of Prosthodontics while also working in a private practice that focused on prosthodontics, and implant and digital dentistry.

He is a board member of the Hellenic Prosthodontic Association and a member in other Greek and international scientific associations. Since 2019 he has served as the co-director of the ITI Young Athens Study Club.

He has published in Greek and International journals, one of which was awarded with second place in the Digital Poster Presentation of the American Prosthodontic Society in Chicago in 2019.

Kouveliotis also conducts a continuing dental education course in digital restorative dentistry, prosthodontics and implantology in Greece, and he is the key opinion leader for 3Shape Digital Company in Europe.

Faculty Practice Dental Centers
Our expert faculty provide all general and specialty dental care in one location in a private practice environment for patients 14 years of age and up. Fees are comparable to private practice.

Resident Dental Centers
Residents, who have a dental degree and are specializing in an area of dentistry, practice with faculty supervision. Fees are generally 80 percent of those in private practice.