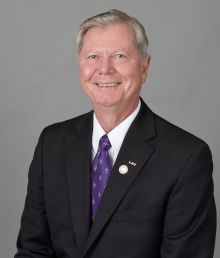 Along with oral health professionals across the United States, the UF College of Dentistry mourns the loss of a much-loved and well-respected colleague, Henry Gremillion, D.D.S., MAGD, who passed away on May 17, 2020. He served on faculty with UFCD from 1991 to 2008 when he left to serve as the sixth dean of the LSU School of Dentistry, his alma mater.

“The dental community has lost a scholar, a true friend, and the kindest and most generous man,” said A. Isabel Garcia, D.D.S., M.P.H, dean. “I will keep his family my thoughts and prayers during this difficult time.”

Gremillion was a long-time faculty member at UFCD having joined our college in 1991 in the Department of Prosthodontics.  He later served as on faculty in the Department of Orthodontics and in 1992 was named Director of the Parker E. Mahan Facial Pain Center. He became a full professor in 2005, and in 2008 Gremillion was named the Parker E. Mahan Endowed Professor in Orofacial Pain.

Gremillion was a Louisiana native who graduated in 1977 from the LSU Health New Orleans School of Dentistry and went on to become a leader in oral health at the local, state and national levels. His many honors include LSU Health New Orleans School of Dentistry Alumnus of Year in 2001, the school’s highest alumnus award, and the UF College of Dentistry Teacher of the Year in 2002 and 2007. A beloved educator, the Florida Dental Association honored him as the Florida Dental Educator of the Year in 2002 and 2006. He received the Louisiana Academy of General Dentistry Career Service Award in 2003. He was selected as a 2007 Distinguished Professor by the University of Florida Blue Key Society.

Condolences can be sent to: