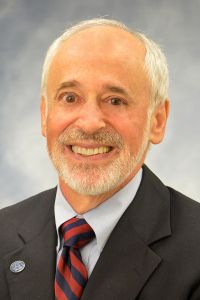 “Our college family grieves his untimely and unexpected loss, and sends deepest condolences to his loved ones,” said A. Isabel Garcia, D.D.S., M.P.H., dean.

Heft was a professor in the Department of Oral & Maxillofacial Surgery and director of the Claude D. Pepper Center for Oral Health in Aging. He joined the college in 1984 and served on faculty at the University of Florida for over 35 years. He was first hired with the Department of Community Dentistry and Behavioral Science before transitioning to the Department of Oral and Maxillofacial Surgery in 1987. He was a member of the McKnight Brain Institute at UF and held appointments in both the College of Medicine and the College of Public Health and Health Professions.

In addition to serving in several leadership roles at UFCD, Heft was extensively involved in governance activities across the University of Florida, serving as Faculty Senate Chair and as a member of the UF Board of Trustees in 2013-14. His advocacy for oral health and oral health research was well-known and recognized, culminating with his service as President of the American Association for Dental Research in 2007-2008 and of the International Association for Dental Research in 2015-2016.  He also worked extensively across the federal sector including the U.S. Department of Health and Human Services, the National Institutes of Health, and the Veterans Administration. Earlier in his career, he completed a post-doctoral fellowship in the National Institute of Dental Research and was a staff fellow at the National Institute on Aging from the mid-70s to early 80s. From 1975 to 79 he served as a commissioned officer in the U.S. Public Health Service.

Heft earned a bachelor’s in engineering in 1970 and his dental degree in 1974, both from the University of Pennsylvania. He also attended American University in Washington, D.C., where he completed a master’s (1981) and a doctorate (1982) in psychology.