For Gator Dentists currently practicing, those planning to retire, and those who just retired, William T. “Terry” Reid, D.D.S., has one message:

Don’t miss this window of opportunity. Fund now, give back to the college now; it’s what you should be doing for your own edification and for the edification of the students who are still in school. If you wait until you’re gone, you won’t ever develop relationships with the students you’re supporting.”

Reid and his wife, Jackie, have been married 52.5 years, and have a decades-long relationship with UF dating back to the 1960s. He earned his pharmacy degree in 1966 and Jackie earned her journalism degree in 1965.

There’s no question that the Reids “bleed orange and blue through and through,” as Gator Boosters with scholarships established in the College of Dentistry, and also in the UF colleges of Pharmacy and Journalism. Back then, tuition was $133 a semester for Reid’s pharmacy education and he made it through with the help of several scholarships. As Reid put it, a $300 scholarship for a semester and he was “doing just fine.”

After earning his pharmacy degree and graduating fourth in his class at UF, Reid was destined for dental school. The UF College of Dentistry wasn’t established until 1972, so the dynamic duo headed to Atlanta for Terry’s dental education at Emory University while Jackie put her journalism degree to work as an editor for the Emory alumni magazine.

Fast forward a decade: Reid graduated first in his class from Emory in 1971, served two years as an active duty dentist in the Air Force and then set up private practice in Stone Mountain, Georgia.

“What I know is that, without scholarships, I would not have two professional degrees,” Reid said.

“We didn’t want our daughters to have to make a decision after we’re gone about where our support would go,” Reid said. “We said, ‘let’s make the decision now, during our lifetime.”

They haven’t, for one second, questioned that decision over the past 21 years.

We have built some of the most fantastic relationships and had so many good laughs and so many moments where we were choked up and could barely speak because it is so wonderful to know the impact you have. We could tell stories all the way through from 1998 to now — having meals with the students, getting to meet them and hear about their parents and families. It’s priceless, it’s absolutely priceless,” Reid said.

First year D.M.D. student Rhonda Sneij, a Miami native fresh off her Class of 2022 White Coat Ceremony, is the current beneficiary of the Reid’s dentistry scholarship. Sneij, who has a vibrant smile and personality, is a lot of things: youngest sibling to three brothers and a sister, a Christian heavily involved with church and mission trips back home, a committed volunteer for those who are underprivileged, and a graduate of the University of Miami who majored in chemistry and minored in mathematics and political science.

Sneij’s fascination with dentistry led her to volunteer on her church-funded dental mobile unit, and has fueled her desire to be a part of the college’s educational service trips; she’ll head to Guatemala in August. But part of what makes Sneij so special is the adversity through which she’s journeyed to get to dental school at UF. Sneij lost both of her parents — Syrian natives — to colon cancer, her mother in high school and her father in 2017.

It has been a difficult road that I have been on, but it just makes me appreciate life so much more and has instilled in me the desire to pay it forward to others, just like Dr. Reid,” Sneij said. “I was blessed with the opportunity to enter the UF College of Dentistry. It has been an amazing journey so far, and I work hard to make God, my parents and my family proud.”

According to the American Dental Education Association, the average educational debt for all U.S. indebted dental school graduates in the Class of 2018 was $285,184. While UFCD dental graduates’ debt level, including undergraduate debt, is lower than the U.S. average, educational dental costs are a pressing concern for dental students and administrators alike.

“The great amount of loan debt that we accumulate during our dental journey can be quite discouraging. Having the support from alumni and friends like Dr. Reid makes the journey a bit more endurable,” Sneij said. “You learn about people who are supporting your dream without even knowing you and it sparks hope in your heart.”

On a sunny day last fall prior to the Gators versus South Carolina football game in The Swamp, Reid and Sneij had their first opportunity to meet and connect over breakfast — they talked about life, about dental school and more. 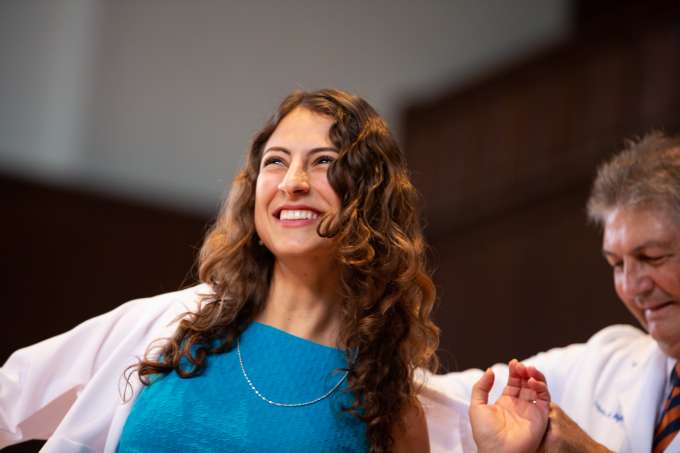 “Rhonda is extremely bright and personable, she’s talented and family-oriented. She’s a no fail when she sets out on her career, no matter what path she chooses,” Reid said. “Anyone who comes to her for professional services is going to feel relaxed, they’re going to feel confident, and they’re going to feel like they’re in the best possible hands; she really exemplifies all of that. That’s what struck me right away.”

There was a level of comfort and familiarity for Sneij as well.

“When Dr. Reid approached me with open arms ready for a warm hug, I knew the meeting was going to be less like a business meeting and more like a friendly gathering,” Sneij said. “We shared stories and laughter the entire conversation as if we had known each other for years. Dr. Reid is both a selfless and humble individual who has already greatly impacted my life, directly and indirectly.”

One of the topics of conversation that day was Reid’s service in the Air Force, a leap Sneij had been considering. After having her questions answered, concerns and doubts addressed by Reid, Sneij ultimately applied to be a dentist in the Air Force.

“Dr. Reid is the epitome of whom I want to be upon graduating dental school.”

And for the Reids?

“You just can’t put a value on what we get from our relationships, and how much we enjoy this. It’s truly priceless.” 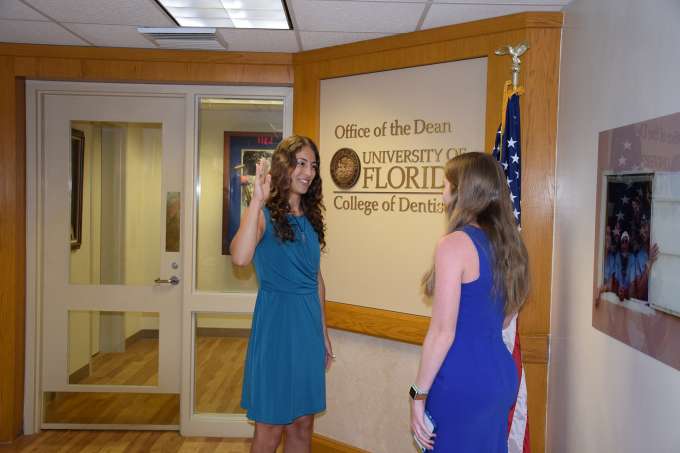 On May 1, Rhonda Sneij and fellow DMD Class of 2022 member Lynn Phu took the next steps to a lifetime of service as dental professionals, and now second lieutenants in the U.S. Air Force. Rhonda and Lynn join a proud line of service men and women — students, residents, faculty, staff, alumni & friends — who are a part of the University of Florida College of Dentistry community. More photos on Facebook

If you are interested in making a gift to the UF College of Dentistry, please contact Rick Miller at rwmiller@dental.ufl.edu or 352-273-5779.