University of Florida College of Dentistry researcher Zsolt Toth, Ph.D., an assistant professor in the UFCD Department of Oral Biology, was awarded a four-year, $792,000 research grant from the American Cancer Society, or ACS, to study the oncogenic herpes virus infection.

The American Cancer Society annually awards Research Scholar Grants for promising research projects that may lead to the elimination of cancer as a major health problem. Recipients must be in the first six years of an independent research career or faculty appointment.

Toth, now regarded an ACS Scholar, was recognized at the inaugural American Cancer Society award ceremony at the ACS Hope Lodge in Gainesville, along with co-investigator on the grant Bernadett Papp, Ph.D., research assistant professor at UFCD, and the entire research team. Past ACS Scholars were also honored at the first ceremony of its kind.

I am honored to receive funding from the American Cancer Society, which will help our research to better understand how an oncogenic herpesvirus establishes life-long infection in humans. This grant will enable our systematic efforts to identify the key viral and host factors in tumor herpesvirus infection, which can serve as novel therapeutic targets in the future. Our ultimate goal is to eliminate the spreading of cancer-causing herpesviruses in the human population. 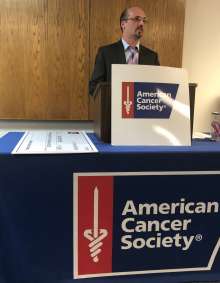 Dean A. Isabel Garcia, D.D.S., M.P.H., UF Health Cancer Center Director Johnathan D. Licht, M.D., and UF’s Mechanisms of Oncogenesis Program Co-Leader Rolf Renne, Ph.D., were all on hand to recognize Toth and his team, and thank the American Cancer Society for its funding towards the team’s important work of identifying key factors in tumor-causing herpes infections, and eliminating the spreading of cancer-causing herpesviruses.

Toth came to the UF College of Dentistry in 2016 after serving as a postdoctoral research associate and then assistant professor of research at the University of Southern California, Los Angeles, from 2008-13. He earned his master’s degree at the University of Szeged in Hungary in 2002, and his Ph.D. from Friedrich-Alexander University Erlangen-Nuremberg in Germany in 2006 before making the move to the United States as a postdoctoral fellow at the Salk Institute in La Jolla, California in 2007.