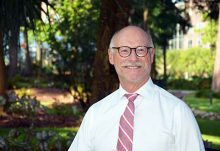 The University of Florida College of Dentistry announced the appointment of Joseph Riley, III, Ph.D., as interim associate dean for faculty affairs effective July 23, 2018. Riley is a tenured professor in the UF Department of Community Dentistry and Behavioral Science, the director of the Pain Clinical Research Unit in the UF Pain Research and Intervention Center of Excellence, and also serves as the deputy director of the South Atlantic Region of the National Dental Practice-Based Research Network.

“A key aspect of the faculty affairs associate dean is assisting faculty in career advancement.  With his own experiences and his long-term service with UF and UFCD, Dr. Riley is uniquely positioned to help our faculty succeed,” said A. Isabel Garcia, D.D.S., M.P.H., dean.

Riley will serve as a liaison between faculty and UFCD administration and work closely with UF on faculty-related matters. The faculty affairs responsibilities include a number of other activities including implementing mentoring and recognition programs; overseeing changes to, and compliance with, the promotion and tenure process; and serving on relevant UFCD committees.

“Dr. Riley is truly a pleasure to work with. He has a calm demeanor and a positive attitude and I am very confident that those traits will be very valuable for our administration and for the faculty he helps guide,” Garcia said.

Riley joined the college 22 years ago when he was completing his fellowship in behavioral dentistry having taken an unusual path to his career in academia. His family moved to Gainesville in the late 60s so his father, who had spent 20 years as a general practice physician in a small town in Michigan, could attend UF College of Medicine to further his medical education and become an anesthesiologist.

Riley briefly attended what was then Santa Fe Community College where he played baseball, and then decided that college just wasn’t for him. At least not yet. Riley moved to Orlando where he opened an auto parts store that specialized in parts for foreign import cars. Over 20 years, his business grew to include four stores, two repair shops and 35 employees.

In 1990, having run a successful business, he decided that it was time for a change so he decided to go back to school.

“I wasn’t sure what I wanted to study, so I went to a bookstore and started reading some textbooks. Engineering seemed interesting but there was too much math. I found a psychology textbook and realized that it was a field that appealed to me,” Riley said.

He explained that, as his business in Orlando had grown, he spent less and less time truly running the business and more time managing his employees. He thought that working with people and understanding how to help and motivate them was a strength of his, and so, at 41 years of age, he ended up earning a bachelor’s in science in 1991 and went into the field of behavioral psychology.

In 1992, he and his wife, Denise, and their three children Jason, Joseph, and Alison, moved to Gainesville so he and Denise could continue their education. At UF, Riley earned a master’s in psychology in 1994, and a doctorate of philosophy in clinical psychology in 1996 with a training focus in behavioral medicine/dentistry. He also completed a one-year clinical internship at the Gainesville Veterans Administration Medical Center, funded by the Geriatric Research Education and Clinical Center, followed by a two-year fellowship in behavioral dentistry funded by the National Institute of Dental & Craniofacial Research through the Claude D. Pepper Center for Research on Oral Health in Aging.

“I wasn’t interested in becoming a therapist. I really loved research, especially data analysis. Working with patients in the facial pain center was my entry to the work of pain research made it possible to meld research, data and psychology to help further our understanding of how pain works,” Riley said.

An active researcher, his interests involve the study of behavioral and psychological influences on health, particularly in the biopsychosocial model of pain and behavioral factors in oral health. He is well-known nationally and internationally for his expertise in pain processing and modulation.

“We have learned over the years that pain starts as a symptom of a disease state, but then it can take on a life of its own,” Riley said. “Our nervous system is dynamic and adapts, almost feeding the pain state. Even when the disease state itself, or what we might call the pain trigger, has resolved, the pain may continue as its own entity.”

Riley said that, in addition, our neurotransmitters are influenced by our thoughts and actions, which means that our brain has the ability to create and alleviate pain. This supports the idea that we can use behavior modification treatments to alleviate pain, and that pharmaceuticals are not always the best option.

Riley became an assistant professor in 1998 in the newly-formed UF Division of Public Health, part of what is now the UF Department of Restorative Dental Sciences.

“I was the first faculty member in the division and served on the search committee for many long-term faculty members including Drs. Henrietta Logan, Scott Tomar and Frank Catalanotto as our division grew,” he said.

Eventually that division became its own department, the UF Department of Community Dentistry and Behavioral Science, of which Tomar is currently the interim chair.

Riley was promoted to associate professor in 2005, and to professor with tenure in 2011, all with the UF Department of Community Dentistry and Behavioral Science.

While he has remained immersed in research, Riley has been actively engaged in UFCD faculty searches and has been a long-time member of the UFCD Research Committee and the Student Performance Evaluation Committee, among others.

“I am really looking forward to focusing a little less on data, and more on the people and programs that comprise our college. I plan on meeting one-on-one with people to learn how I can best serve in this role,” Riley said.