At the University of Florida College of Dentistry, every student, faculty and staff member comes to work with a charge of contributing to the college’s three-part mission – education, research, and patient care. 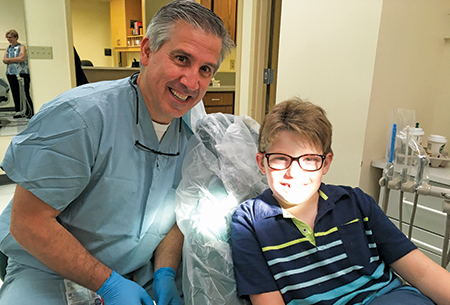 Tangible results oftentimes measure success: an A+ on an exam, published research, a stellar performance evaluation, and numerous patients seen each day in the college’s student, resident and faculty practice clinics as the college strives to make an impact on oral health in the state of Florida and beyond.

But often, personal success stories have a way of making UFCD faculty and students, alike, take a step back from the day-to-day, and realize the true impact they have on patients’ lives when caring for the many adults and children that enter through the college’s clinic doors.

It was an ordinary fall morning at the UF Academic Health Center for Calogero Dolce, D.D.S., Ph.D., chair of the Department of Orthodontics, who practices in UF Health’s Faculty and Resident Orthodontic Clinics. Dolce took a quick trip down to the health science center Starbucks for a daily dose of caffeine, but he got more than expected from the crowd favorite: boisterous, happy and energetic Starbucks manager, Bob Pisco, who runs a well-oiled machine fulfilling endless drink and food orders at the always-bustling location.

“I think you’re treating my son,” Pisco said in passing as he jotted Dolce’s coffee order on a cup. It didn’t take but a minute of conversation for Dolce to identify Pisco’s, Nathan, as a frequent patient of the college.

It was through that conversation, and those with Bob’s wife, Nathan’s mom Melissa, that Dolce realized the life-changing impact the College of Dentistry and the interdisciplinary team of health care providers at UF Health has had on Nathan and the Pisco family.

At the College of Dentistry, the belief is oral health is the gateway to overall health. The expression couldn’t be more true for nine-year-old Nathan.

It took Bob, a Navy veteran, and Melissa, senior pastor at Celebration United Methodist Church in Gainesville, nearly seven years of struggling through various behavioral issues at school and sleepless nights at home for Nathan to finally get the help he needed.

Nathan’s pediatrician recommended him for a sleep study at age seven in 2016. From there it was a domino effect, and a complete whirlwind of doctor appointments for the Pisco family.

“Prior to Nathan’s diagnoses just two years ago, we were having an incredible amount of difficulty,” Melissa said, “and we were not on a good track in school. Nathan’s school believed that his challenges were all behavioral. We felt there was more to it but were unable to get answers; now, we are really able to understand the concerns. By getting him the care and treatment he needed, it has put him on a path to success academically.”

In Nathan’s case, it was a true team effort and cross-collaboration at UF Health that led Nathan to the College of Dentistry. Following Nathan’s sleep study, pediatric neurologist Paul Carney, M.D., conducted an electroencephalogram, or EEG, and a magnetic resonance imaging, or MRI. Nathan registered an irregular EEG, and his MRI revealed an underdeveloped brain, small skull and narrow airway; he was diagnosed with central and obstructive sleep apnea.

The interdisciplinary team was assembled and a rapid-fire treatment plan devised.

“We tried getting him into a dentist when he was 18 months old, but we weren’t able to get him to sit still to get the brushing done,” Melissa said. “We ended up putting sealants on his teeth to protect them.”

Collins removed his adenoids and shaved his tonsils to help open the airway. Then, following a two-month recovery, enter dentistry. Adewumi gave Nathan his first deep cleaning, extracted teeth and put on several crowns. Next, Dolce got to work expanding Nathan’s upper jaw, which took a month.

“The literature supports expanding the upper jaw to help resolve sleep apnea,” Dolce said. “When you sleep better, you function better and are able to perform in school. While Nathan isn’t completely off his medication, he is getting good sleep, he’s a much happier kid and a lot of the social problems he had are gone now.”

It was certainly a process well worth the wait.

“We got it!” Melissa said. “The first couple of days after Nathan’s procedures, I thought he was sleeping so well because of the anesthesia. A week later, I still didn’t want to jinx myself. Nathan was sleeping through the night. His seizures, his ADHD, his behavior in the classroom dramatically improved. If you would have asked me if teeth affect sleep, I don’t know that I would have put this all together. We had his seizures under control; he was eating better, breathing through his nose and sleeping through the night. Those things were absolutely critical. This was a humongous piece of the pie. Before, we were waking up every night between 1:30 and 3:00 a.m. We didn’t realize how chronically tired we were.”

Today, Nathan attends the Einstein School, and pals around with his service dog, Blitzen. He loves Disney, and loves to keep a regimented schedule. He’s delayed, Melissa said, but with ongoing therapy and treatment he’s in a mainstream classroom, receives exceptional student education, or ESE, services, he’s made friends and is much improved. Nathan is still followed by Adewumi and pediatric dentistry, and braces with Dolce are in his future, but for now, a huge weight has been lifted.

“I can’t begin to think about where we would be today based on where we were at in kindergarten,” she said. “They embrace him, they support him, they love him and are so good in working with him. If our path helps another child and family not have to wait until seven years old to be diagnosed and treated, I would be thrilled.”