According to the Blue Ridge Institute for Medical Research, the University of Florida College of Dentistry’s research enterprise now ranks fifth nationally among all U.S. dental schools in National Institutes of Health, or NIH, funding. 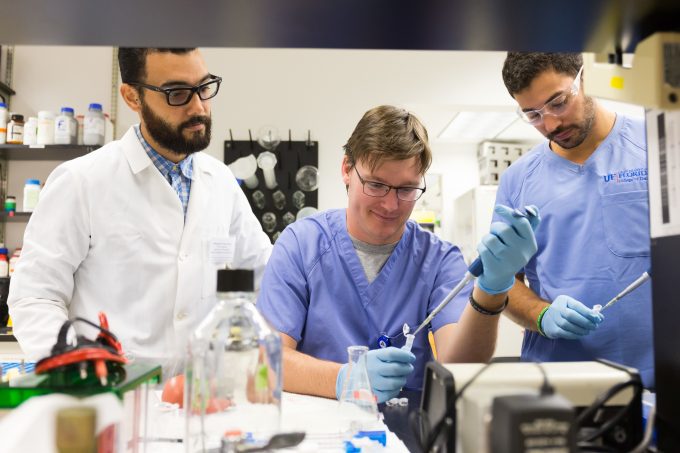 Under the guidance of the College of Dentistry Office of Research and the leadership of Associate Dean for Research Robert A. Burne, Ph.D., the college is nationally recognized for its oral health research enterprise, emphasizing infectious diseases in dentistry, bone biology, pain and neurosciences, and translational research to improve oral health care and patient outcomes. The Department of Oral Biology is one of the top-ranked in the U.S. based on NIH research funding among similar departments.

Last fiscal year, the college received more than $17 million total from all sources in contracts and grants to seven departments including community dentistry and behavioral science, oral biology, orthodontics, oral and maxillofacial diagnostic sciences, oral and maxillofacial surgery, periodontology, and restorative dental sciences. The college is currently home to eight research centers including the Pain Research and Intervention Center of Excellence, the Center for Dental Biomaterials, the Center for Molecular Microbiology, the Center for Orphaned Autoimmune Disorders, the Claude Denson Pepper Center for Oral Health in Aging, the Dental Clinical Research Unit, the National Dental Practice-Based Research Network, and the Southeast Center for Research to Reduce Disparities in Oral Health.

Burne was recognized among a number of distinguished UF Academic Health Center faculty honored by UF Health President David Guzick, M.D., Ph.D., in October 2017 when he was officially installed as the Louis and Marge Atkins Endowed Professor at the College of Dentistry to support his research interests.