The University of Florida College of Dentistry’s American Association of Dental Research, or AADR, Student Research Group, or SRG, received the 2018 Outstanding Local Student Research Group Award during the AADR Annual Meeting on March 23. The award includes a $400 prize which will be used to enhance activities at the UF chapter.

The AADR SRG FL was re-established in 2010 with Shannon Wallet, Ph.D., associate dean for faculty affairs and an associate professor in the UF Department of Oral Biology, serving as the faculty advisor. Since 2010 the UF chapter has had between 20 to 40 DMD student members. In 2012 the AADR SRG FL received national awards for the ‘highest percentage of AADR student members relative to dental school enrollment and ‘recruitment of the most new AADR SRG members.’ AADR SRG FL student members have served at the national levels as well. In 2014 Kyulim Lee was elected the NSRG southeastern regional representative; and in 2017 Yandy Gonzalez Marrero was elected as NSRG secretary. 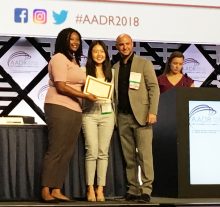 The NSRG recognizes local student research group chapters, LSRGs, for their achievements throughout the year that continue to foster awareness of research in dentistry. The Outstanding Local Student Research Group (LSRG) award is aimed to recognize one particular SRG that has excelled in all categories of a successful SRG.

The AADR National Student Research Group, or NSRG, vision is to “help dental students across the nation establish chapters and encourage participation in their respective schools, to ensure that research is seen as a vital aspect of dentistry.”