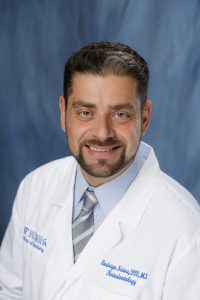 What makes someone choose dentistry as a profession? The answers differ for each person but for Rodrigo Neiva, D.D.S., M.S., a professor in periodontology, it started with his own pediatric dentist where he grew up in Brazil. When he was five, Neiva liked his pediatric dentist so much than he went to the dentist alone. The dentist only lived across the street, but it was a testament to how much he loved going to see him.

“It was so clean and neat in his office, and my dentist was so nice, that’s what first attracted me to the profession,” Neiva said. “He was also a great pediatric dentist.”

Fast forward a few decades and Neiva, who specializes in periodontology*, has been practicing dentistry for 20 years, seven of those at the UF College of Dentistry where he is also the program director for the periodontology residency program. For the Neivas, it is a family affair. His brother and one sister are also dentists, while his other sister and his father are surgeons.

“The thing I like best about dentistry is being able to help people, there is a true satisfaction in that,” Neiva said. “I love the teaching aspect of my career as well.”

“Teaching builds a bridge between the classroom and the clinic. There is so much crossover between lectures and reality in a clinical environment and I work to underscore things I’ve taught while in the clinic, and cases I have treated when I am in the classroom,” he said.

He also enjoys working teaching environment because the dental school is often referred cases that are unusual and difficult, and he enjoys the solving the challenges and, ultimately helping his patients.

Neiva was on faculty with the University of Michigan Department of Periodontics and Oral Medicine before joining the UF Department of Periodontics in July 2010 as the graduate program director and a clinical associate professor.  He was promoted to clinical professor in July 2017. An accomplished lecturer, author and researcher, Neiva earned his dental degree in 1997 from Vale do Itajai University, in Itajai, Brazil, and his master’s in periodontics from the University of Michigan in Ann Arbor in 2003.

Neiva says that once someone is a student, the relationship never ends. He maintains contact with former students and receives texts and emails from former students asking for opinions on cases.

“I enjoy watching former students grow as clinicians as well as people; watching them mature. That, combined with my love of dentistry, makes this a natural place for me to enjoy doing what I do,” he said.

Rodrigo Neiva specializes in tooth extractions, periodontic treatment and dental implants. If you would like to learn more or schedule an appointment, call 352.273.7690.