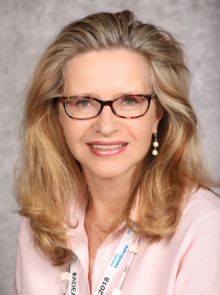 Congratulations to Jaana Gold, D.D.S., M.P.H., C.P.H., Ph.D., an adjunct associate professor in the UF Department of Community Dentistry and Behavioral Science who was tabbed one of the American Dental Association’s Leaders in Evidence-Based Dentistry, and awarded one of three evidence-based dentistry awards at the ADA’s Annual Meeting in Atlanta Oct. 19-23

Gold was honored with the 2017 Evidence-Based Dentistry Mid-Career Faculty Award for her accomplishments in teaching and promoting evidence-based dental practice at the UF College of Dentistry and throughout the profession as an advocate for improving the oral health of citizens in Florida and beyond.

Presented by the ADA and the American Association for Dental Research (AADR), the awards are bestowed annually upon educators and clinicians who have made significant contributions to implement and advance evidence-based dentistry.

Gold is the director of evidence-based dentistry at the college, where she leads a widely acclaimed introductory course for second-year dental students and an elective course for third and fourth-year students. She is also an online instructor at A.T. Still University’s College of Graduate Health Studies and is a published researcher.

Last year, Gold was elected to the Leadership Council of Oral Health Florida and was also elected as section councilor for the American Public Health Association’s Oral Health Section.