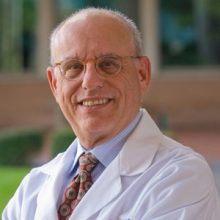 Congratulations to Barry Setzer, D.D.S., who received a Public Service Award from the Florida Dental Association, or FDA, for his humanitarian service to the state of Florida during the 2017 FDA Annual Meeting in Orlando in June. Setzer was also honored for his service to the FDA as an outgoing member of their board of trustees.

The FDA Public Service Award is awarded to those who “perform extraordinary acts of charitable service related to oral health that have left an indelible mark on the individuals, groups, or communities it touched.”

Setzer volunteers with the college as a courtesy clinical associate professor in pediatric dentistry and is also a member of the college’s Academy of Alumni and Friends, or AAF, where he has served as an active leader for the association for many years including as AAF president. While the word “alumni” in the association title is self-explanatory, the word “friend” means anyone who has been an active supporter of the college. When the college was first created in the late ‘60s, there were no alumni supporters in the state. There were, however, many dentists who were dedicated to the idea of having a state dental school and who advocated and worked tirelessly on behalf of the college, both in the beginning and throughout the ensuing years. Later, these people became known as “friends” when the association was formed and Setzer, who earned his dental degree from the University of Maryland, certainly exemplifies the spirit of that title.

A native of Jacksonville, Setzer completed his residency in pediatric dentistry at the Children’s Hospital of Philadelphia and the University of Pennsylvania School of Dental Medicine. He also served as a captain in the U.S. Air Force Dental Corps. Setzer is a Fellow of the International College of Dentists, American College of Dentists, Pierre Fauchard Academy, Academy of Dentistry International and the American Academy of Pediatric Dentistry. In 2016, Setzer received the Sally D. Ott Memorial Award for Outstanding Service to the Northeast District Dental Association, as well as the 2013 FDA Foundation Humanitarian Award for his exemplary humanitarian service to the state of Florida.

Setzer was instrumental in the success of the 2016 Florida Mission of Mercy, or FLA-MOM, as the fundraising lead. The FLA-MOM received more than $590,000 in donations and in-kind revenue, with a net income of more than $130,000 to support the 2017 FLA-MOM.

Setzer has practiced dentistry in Jacksonville since 1977 through his private practice, Setzer, Cochran, Soares & Hubbard Pediatric Dentistry. In addition to his volunteer teaching at the dental college, he is a courtesy assistant professor in pediatrics at the UF College of Medicine – Jacksonville. He and his wife, Ellen, have one daughter, Dena, a son-in-law, Jason Rosen, and a grand-son, Adam Shepherd “Shep” Rosen.

We are proud to count him as a “friend” of our college!