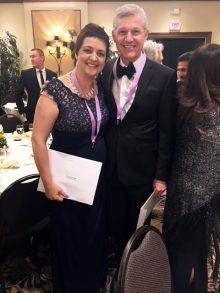 Nearly 90 faculty, students, parents and friends attended the dinner which began with a social hour, followed by dinner and the induction ceremony. The following graduating students were inducted into membership: Asher Adamec, Giovanni  Aldama,  Lisset Arenas, Brianna Bailey, Daniel Buono, Christina Choe, Kelsey Cronauer,  Adrian de Moya,  Alissa Morris, Alexsandro Spinuso, Tyler Wahl and Christian Vidalon. In order to be eligible for membership in OKU, students must be in the top 20 percent of their graduating class scholastically, and have high moral and ethical characteristics with the potential for contributions to the dental profession in the future.

The two new faculty members inducted are Margarete Ribeiro-Dasilva, D.D.S., M.S., Ph.D., and Saulo Geraldeli, D.D.S., both from the UF department of restorative sciences. Faculty are nominated by the members of Xi Omicron and voted on by the active roster. Induction into OKU for faculty members is based on high ethical and moral characteristics, and a history of service to the sciences and literature of the dental profession. Only two faculty members can be selected for induction each year according to the by-laws of Xi Omicron and the Supreme Chapter of Omicron Kappa Upsilon.

In addition the active members also recognized third-year student Andres Alvarez with the William S. Kramer Award for Excellence. Andres was selected based on his scholarship, high character and ethical performance and his potential to contribute to the dental profession in the future. The award is named for Dr. William S. Kramer, a past president of Omicron Kappa Upsilon.

One student from each UFCD class was also recognized to receive the Xi Omicron’s Student Ethics Award.  The students receiving the ethics awards are: Omar Alkorek, Class of 2017; Brad Hagen, Class of 2018; Christine Adams, Class of 2019; and Benjamin Shepperd, Class of 2020.

Omicron Kappa Upsilon was founded in 1914 at the Northwestern University School of Dentistry when a group of students approached Dean G.V. Black with a request to form an organization consisting of dental students and based on scholarship and character as manifested by an election of the dental school’s faculty.  Xi Omicron Chapter at UFCD was chartered by the Supreme Chapter of OKU in 1974 with nearly 20 of the school’s faculty participating. The first three members of Xi Omicron from the Alpha Class were elected on June 11, 1976.