As Councilor, Gonzalez Marrero will represent the NSRG at the annual AADR Council meeting, determine issues alongside other officers to present to the AADR Council, report to the NSRG on the actions of the AADR Council, be responsible for organizing the DENTSPLY/Caulk Competition, and attend every officer meeting.

Gonzalez-Marrero graduated from the University of South Florida in 2014 with a Bachelor of Science degree in Biomedical Sciences, and was selected to participate in the 2015 Summer Research Program as an incoming dental student in 2015. During his undergraduate studies, he worked as a student researcher in the USF Health Byrd Alzheimer’s Institute looking at Tau pathology, specifically the effect of TNFα on pathological TDP43 and Tau in vitro. He also worked in the Department of Chemistry at USF performing docking studies and MD simulations of the catalytic domain of MMP9 protein. 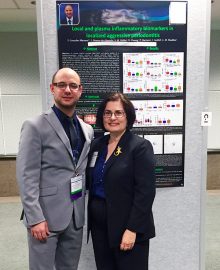 A year ago, Gonzalez-Marrero won a national research award, taking first place in the 2016 DENTSPLY/Caulk Competition in the Clinical Science category for his research project, “Local and Plasma Inflammatory Biomarkers in Localized Aggressive Periodontitis” during the AADR Annual Meeting.