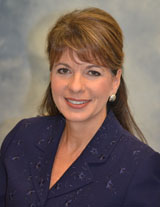 Congratulations to Deborah Dilbone, D.M.D., who was accepted as a Fellow of the 2017-2018 American Dental Education Association, or ADEA, Leadership Institute and also as the 2017 ADEA/ADEAGies Foundation Drs. Connie L. and Richard R. Drisko Scholar in the ADEA Leadership Institute. As the recipient of this award, she receives a $10,000 stipend for tuition and fees.

Dilbone, D.M.D., is a clinical associate professor in the Department of Restorative Dentistry, has served as the director of the Operative Division since January 2013. She earned her dental degree from UF in 1993 and became a visiting professor in the Department of Prosthodontics in 1994, a clinical instructor in the International Educated Dentists Program, or IEDP, in 1997, and a clinical assistant professor in 2000. Dr. Dilbone worked in private practice before joining the IEDP program in 1997. She teaches pre-clinical, clinical and didactic courses with dental students from their first through their fourth years, and is a member of local, state and national dental organizations and was inducted into Omicron Kappa Upsilon in 2014.