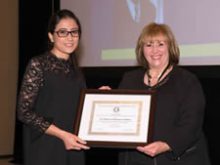 Mehrnaz Tahmasbi-Arashlow, D.D.S., pictured on the left, won the 2016 Howard R. Raper Award which recognizes a promising graduate student who demonstrates an interest in oral and maxillofacial radiology and intends to pursue a career in academia. The award, co-sponsored by Dentsply/Rinn and the Howard Riley Raper Fund, includes a certificate and a check for $1,000.

The radiology program residents, as a group, won a prize for their diagnostic abilities during the interpretation session, competing against residents from across the United States and Canada. The group also had the largest number of abstracts presented during the program, totaling 25 percent of all abstracts accepted for presentation.

“I am so very proud to know that the radiology program’s residents performed successfully during the recent meeting. It is truly a testament to their talents and skills as well as the quality of their education at our college,” said A. Isabel Garcia, D.D.S., M.P.H., dean.