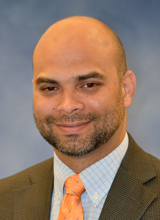 Congratulations to Alex Delgado, D.D.S., who is the recipient of the 2015 Judson C. Hickey Scientific Writing Award in the Research Article Category from the American Prosthodontics Society (APS). The award will be presented during the APS 2016 Annual Meeting in Chicago on February 26.

Delgado received the award for his article “Survival rate of lithium disilicate restorations at four years: A retrospective study” published in The Journal of Prosthetic Dentistry. During the first six months of its publication, the article was downloaded more than 1,000 times.

Delgado joined the college in June 2014 as a clinical assistant professor in the operative division of the UF department of restorative dental sciences. He earned his bachelor’s degree from Colegio Champagnat, Caracas, Venezuela, in 1996 and his dental degree in 2001 from Universidad Santa María, also in Caracas. In May 2014, he earned a certificate in operative dentistry from the University of North Carolina School of Dentistry in Chapel Hill, North Carolina. From 2000 through 2008, he worked in clinical settings in Venezuela and North Carolina, and was also a teaching assistant at UNC while he was completing his residency.

He teaches didactic, preclinical and clinical fundamentals in restorative dentistry, and also practices in the college’s faculty practice and serves as the faculty advisor for the DMD class of 2018.

If you are interested in reading the article, you can access it here when you are within the college.