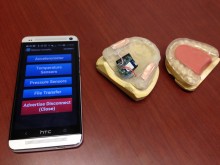 Gainesville, Florida – The next big thing in wearable technology may show up right inside your mouth.

Researchers at the University of Florida have developed a smart mouth guard equipped with sensors that allow it to detect if you’re grinding your teeth, tell your dentist and even help you stop doing it.

What’s more, the next version of the guard, currently under development, may be able to tell when an athlete is becoming dehydrated or overheated and even whether he or she may have gotten a concussion.

The device is the creation of Yong-Kyu “YK” Yoon, an associate professor of electrical and computer engineering, and his colleagues. Yoon, who also is director of the Multidisciplinary Nano and Microsystems Lab at UF, worked on the project with Fong Wong, an associate professor in UF’s Restorative Dental Sciences Department and Craniofacial Center.

Their concept won them a second-place prize earlier this month at the International Contest of Applications in Nano/Micro Technologies in Anchorage, Alaska, where the UF team represented the United States.

Yoon said he came up with the idea about five years ago when he was developing a set of dentures that alert the dentist to an improper fit even if the patient doesn’t complain about it. That got him to thinking about something similar that could help an even larger share of the population – those who suffer from bruxism, aka teeth grinding.

Wong said at least 20 percent of the U.S. population – about 30 million people – suffer from bruxism, which frequently is caused by stress and can lead to damaged teeth, headaches, insomnia, and a sore jaw.

Most people don’t even know they do it.

The most common way to diagnose it is for the patient to spend a night in a sleep clinic.

Wouldn’t it be easier and more efficient, Yoon thought, for the patient to stay home using a mouth guard equipped with sensors that could detect bruxism, measure how much force was being applied by the jaw and which teeth were most affected?

“Wearing a mouth guard is less intrusive than spending time in a sleep clinic,” she said. “It cuts cost when it reduces the number of clinical psychology sessions.”

The prototype they created does all of that and can send the information to a computer or smart phone via Bluetooth, where a dentist or orthodontist can retrieve it, make a diagnosis and suggest treatment.

“That kind of information has been unavailable until now,” Yoon said.

The mouth guard is an improvement over traditional bruxism therapies, such as behavioral modification training during clinical sessions, Wong said.

“The advantage is that the guard extends the treatment beyond the time spent in the clinic,” she said. “This promises greater effectiveness and lower cost.”

Yoon said one population that could stand to benefit from the smart mouth guard is combat veterans with post-traumatic stress, which can lead to bruxism.

But the smart mouth guard’s potential extends beyond dentistry.

The next iteration could be aimed at athletes. Using different types of sensors, Yoon said, it could detect dehydration or dangerous core body temperature and alert a coach to pull a player off the field. That same information could be useful for firefighters.

It also could measure the strength of a blow to the head, which could give doctors early warning about the possibility of a concussion.

Note: This release has generated a great deal of interest and coverage in local and national media. If you google search “smart mouth guard equipped with sensors wong,” here are the results. So congratulations to Dr. Wong and the team that is working together on this new technology.