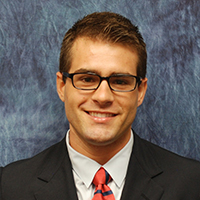 Andres Alvarez, a first-year DMD student at the University of Florida College of Dentistry, recently received three awards in recognition and support of his research activities. He received a research award from the American Dental Association (ADA) Foundation and the Academy of Operative Dentistry; and two travel awards, one from the American Association for Dental Research and one from the International Association for Dental Research.

Alvarez received a $6,000 funding award from the ADA Foundation and the Academy of Operative Dentistry to fund his research project, A New Arginine-based Bonding Agent with Long-lasting Anti-caries Activity. The ADA award includes $6,000 to perform the proposed research project and an additional $1,000 to help pay for a table clinic during the American Academy of Operative Dentistry’s scientific session.

He also received a 2015 American Association for Dental Research (AADR) Bloc Travel Grant of $1,000 for the scientific excellence of an abstract he submitted for the AADR’s annual session.

From the IADR, Alvarez was one of six students nationally to receive the Colgate Research in Prevention Travel Award of $2,000, to help fund his attendance at the IADR/AADR/CADR General Session and Exhibition in Boston in March where he presented his abstract, Arginine metabolism and dental caries in children: a 12-months study.

Alvarez was a participant in the college’s 2014 Summer Research Program and is from Miami, Florida. He earned his bachelor’s in molecular biology and microbiology from the University of Central Florida in Orlando and his master’s in biomedical sciences from Barry University in Hollywood, Florida. His faculty mentor is Marcelle Nascimento, D.D.S., M.S., Ph.D., and Saulo Geraldeli, D.D.S., M.S., Ph.D., serves as his co-mentor.