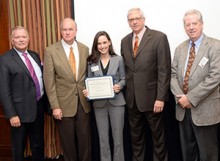 The symposium featured oral and poster presentations of research projects by dental students and graduate students from dental schools across the nation.  At this year’s symposium, 88 students represented 47 dental schools in 28 states, the District of Columbia, and three Canadian provinces.

The symposium was sponsored by the University of Tennessee College of Dentistry and co-sponsored by the Hinman Dental Society, which holds one of the nation’s largest continuing dental education meetings each March in Atlanta.  The symposium was also supported in part by grants from the National Institute for Dental and Craniofacial Research (NIDCR), the ADEAGies Foundation, the Procter & Gamble Company, the University of Tennessee College of Dentistry Alumni Association, the Tennessee Dental Association Foundation, and the Colgate-Palmolive Company.

The keynote speaker at the welcoming banquet was Lawrence A. Tabak, D.D.S., Ph.D., principal deputy director and senior investigator of the National Institutes of Health and former director of the NIDCR.  Tabak spoke on “The Top 10 Things I Have Learned,” which included valuable insights on working with others, benefiting from the mentor-mentee relationship, and being guided by your data even when the results conflict with your understanding of how things work.

Eight awards were given for the most outstanding student presentations, four in clinical research and four in basic science research, in addition to the NSRG award.

The AADR National Student Research Group is a student-run organization whose main purpose is to foster an environment in every dental school whereby students interested in enriching their dental education through research are encouraged to do so. It is composed of a network of self-governing local student research group chapters at each dental school and is led nationally by officers elected through a majority of votes from all members.