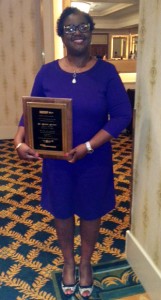 Congratulations to Abi Adewumi, B.D.S., F.D.S.R.C.S. (Eng), M.Ped., DentRSC (Eng), who was recently appointed Residency Program Director for the University of Florida Department of Pediatric Dentistry and received an award from the National Dental Association Foundation.

Adewumi, a clinical associate professor, was appointed program director of the pediatric dentistry residency program effective July 1, 2014. She has served on the faculty since 2005; her primary focuses are teaching and research, and she also provides clinical services.

She earned her dental degree in 1991 and earned a Fellowship in Dental Surgery from the Royal College of Surgeons of England in 1996. She went on to earn her master’s degree in pediatric dentistry from the University of London in 1999 followed by her specialist training in pediatric dentistry at King’s College Dental Institute and St. George’s Hospital in London, England. In 2003, she was awarded a Diploma of Member in pediatric dentistry from the Royal College of Surgeons of England and is on the Specialist Register of the General Dental Council of the United Kingdom. In 2008, Adewumi became a Diplomat of the American Board of Pediatric Dentistry.

“This award is well-deserved and we are certainly honored to have her commitment to dental education recognized at the national level with the award and at the college level with her appointment to program director,” said Boyd Robinson, D.D.S., M.Ed., interim dean.

The program recognizes dental faculty who demonstrate excellence in professional development and a willingness to support and to help others in their quest for knowledge and advancement. Each recipient receives a $750 cash award from the award sponsor, Colgate-Palmolive Company.