The University of Florida College of Dentistry Xi Omicron Chapter of Omicron Kappa Upsilon National Honor Society held their 38th Annual Convocation Dinner May 15, 2014 at the Hilton Hotel and Conference Center. More than 100 active members, new alumni and faculty members were in attendance for the semi-formal dinner. The purpose of the convocation is to induct 10 graduating DMD seniors and three faculty members into the nation’s oldest dental honor society.

Omicron Kappa Upsilon had its inception with the dental class of 1914 at Northwestern University Dental School. A group of students petitioned Dean G.V. Black to form an honor organization which would “consist of dental students exclusively and be based on scholarship and character as manifested by election of the dental school faculty.” The idea was well received and Omicron Kappa Upsilon was established. Chapters now exist in most dental schools in the United States and Canada. Xi Omicron Chapter at the University of Florida College of Dentistry received their charter in 1974.

The 10 new D.M.D. graduates who were inducted are: Kayanna Beckmann, Philip Bell, Alexandra Best, Luisa Betancur, Chelsea Brinkman, Edward Cronauer IV, Melvin Lopez, Aaron Mamo, Sunny Patel and Eddy Sedeno, III. To be considered for OKU membership, a senior D.M.D. student must be in the top 20 percent of their graduating class, exhibit high ethical and professional standards, and show potential for future contributions to the art and science of dentistry. 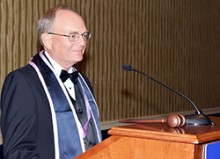 In addition to the alumni members, three faculty members were inducted into OKU: Abi Adewumi, B.D.S., and Deborah Dilbone, D.M.D. These are existing faculty of the College of Dentistry, who have shown outstanding contributions to the art and science or literature of dentistry. Joe Riley, Ph.D., was selected for membership in an honorary category that recognizes an outstanding non-dentist faculty who has also made outstanding contributions to the profession.

Omicron Kappa Upsilon also recognizes a third year student annually to receive the William S. Kramer Award of Excellence. This award is based on scholarship, character, and promise for advancement of and dedication to the dental profession. The 2014 OKU Kramer Award was presented to third-year D.M.D. student Mikey Yuan.

Several years ago, Xi Omicron Chapter initiated the annual OKU Student Ethics Awards to recognize a member of each class for outstanding ethical behavior. Traits such as honesty and sincerity, personal integrity, professionalism, empathy toward peers and patients, excellent rapport with faculty, staff and peers, and a dedication to a career in dentistry were considered. The recipients of Xi Omicron’s Class Ethics Awards for 2014 were: Keith Kiskaddon, D.M.D., Class of 2014; Tyler Oatmen, Class of 2015; Karin Schey, Class of 2016; and Asher Adamec, Class of 2017.

The evening was a celebration of excellence and the recognition of the high ethical standards that makes our professional what it is today.