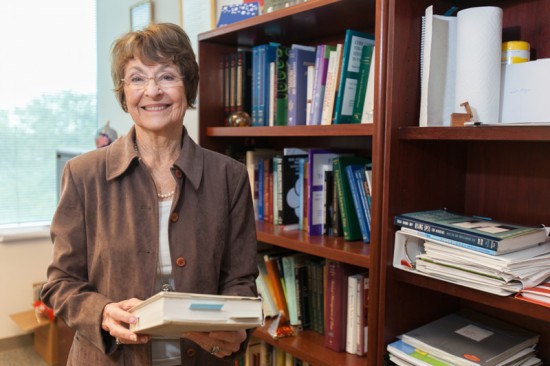 For four decades, Henrietta Logan has paired belief in herself with hard work to achieve success.

Looking back at her years in academia, Henrietta Logan has come a long way.

“I always characterize it as ‘I started out when there was no line at the ladies room at a research meeting,’” she said.

There were so few women in her field as a researcher that the challenge of being taken seriously was a constant battle, she said. Now, nearly four decades later, after climbing the ladder to the top as a professor at UF and director of a research center, Logan retired in January.

She received her Ph.D. from the University of Iowa in 1976 and transferred to the University of Florida in 1999 to strengthen the department of community dentistry and behavioral science at UF. Originally, Logan was not interested in applying for the position. It was her husband who gave her an extra push to learn what Florida offered that Iowa didn’t.

After visiting, Logan felt inspired by the opportunities available at UF.

“I saw the potential to build the kind of research program I imagined,” she said.

In 2007, Logan and her team worked from 4 a.m. to 10 p.m. for a year to prepare a $17.5 million proposal to the National Institutes of Health. She knew UF needed a center dedicated to improving research and educating the community about oral health disparites.

“I knew what was possible,” she said. “I knew we had all the pieces here at UF.”

The proposal was approved, and with the funding, her team established the Southeast Center for Research to Reduce Disparities in Oral Health in October 2008. As the center’s director, Logan continued to dedicate herself to the field.

“I envisioned I could work in the communities to make a difference with residents while still maintaining high-quality science,” she said.

She knows the people of North Florida care about their health, but their access to care services and health information is sometimes lacking.

“A lot of what we’ve done in the center is learning to translate what we do know so that individuals can take ownership of their own health and behave in a way that is in their best interest,” she said.

In 2008, the American College of Dentists presented its Award of Merit to Logan for her outstanding contributions to dentistry and service to humanity.

Working full time with two kids wasn’t easy. Through all the success, she still faced the same challenges as any working woman, she said.

“There is no doubt that there were some tough times. For a woman to be noticed, she generally had to be more strident and more aggressive,” she said.

Logan, however, knew what she could achieve. Her now 104-year-old father instilled a valuable mantra in her: Believe in yourself.

After years of working hard to support UF’s College of Dentistry, Logan’s excited for the next step in her life.

She and her husband have moved to Oak Hammock at UF,

a local retirement center. With the extra time, their bucket list is growing. Logan’s curiosity to learn is insatiable and she’s ready to enjoy life.

“I think we have to do a lot of digging before we can sit on top of a mountain,” she said.