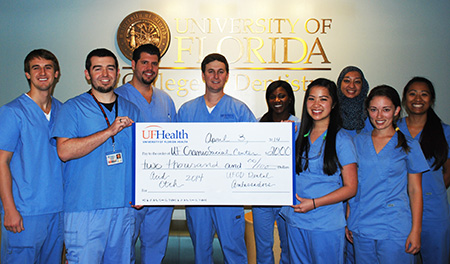 On March 25, the University of Florida’s College of Dentistry Dental Ambassadors hosted the 7th Annual Acid Etch Talent Show and raised more than $2,000 for the UF Craniofacial Center.

There is no doubt that the college is loaded with talented students so the competition was tight, but the judges handed first place to Robert Pierre for his R&B rendition of “All of Me” by John Legend. Nora Abdel-Rahim, president of the UF Dental Ambassadors, received a second-place award for her dental-themed rap, a talent she debuted at the 2013 Acid Etch

Talent Show and repeated due to popular demand for an encore.  Andrew Fagin won third place for his original song, “She’s on Fire.” Karin Schey received the bake-off prize for her Cookie Butter Brownies.

In addition to being entertaining and fun, the Acid Etch Talent Show raises money for charitable organizations such as Love Without Boundaries and The Boys and Girls Club of Alachua County.

This year the show coordinator, Ann Hoang, wanted directed the proceeds closer to the dental profession, “We wanted direct the money we raised to something personal to us so we chose the UF Craniofacial Center so it would be used to help local children and their families with the costs associated with treating cleft palate/lip,” Hoang said.

More than 200 students, faculty, staff, residents and friends of the college attended the 2014 Acid Etch Talent Show.  The event raised $2,015 through ticket sales, raffle prizes, baked goods, local sponsorship and many generous gifts, which was a record amount for Acid Etch.

“On behalf of the entire UF Craniofacial team and the many hundreds of families we serve through Central and North central Florida, we want to extend our great appreciation to the supports of the Acid Etch Talent Show and to the UF College of Dentistry Dental Ambassadors for their support,” said John A. Nackashi, M.D., PhD., medical director of the craniofacial clinic. “This was an amazing event and a generous contribution.”

On behalf of the Dental Ambassadors and the UF College of Dentistry, thank you to everyone who helped make Acid Etch an outstanding success. We look forward to seeing you at Acid Etch 2015!